Gender-specific differences in suicidal behaviour have been analysed in a number of recent studies. According to these, several socioeconomic, demographic, psychiatric, familial, help-seeking differences can be identified in protective and risk factors between males and females. Gender is one of the most replicated predictors for suicide. In the framework of the WHO/EURO Multicentre Study on Suicidal Behaviour, more than fifty thousand suicide attempts have been registered so far. Until now data on more than 1200 monitored suicidal events have been collected in Pecs centre. In most countries male suicid rates are higher. In contrast to suicides, rates of suicide attempts are usually higher in females. Concerning the differences in methods, it is a recognised fact that males use violent methods of both suicide and attempted suicide more often than females. The summarised clinical impression suggests that compliance of male patients is poorer than that of females. According to our data, a typical male attempter is characterised as follows: unemployed, never married, lives alone. He tends to use violent methods; if he takes drugs, it is mostly meprobamate or carbamazepine. A lot of male attempters have alcohol problems or dependence. As for the females, we found high odds ratios in the following cases: divorced or widowed, economically inactive, depressive state in the anamnesis. Female attempters are mainly repeaters using the method of self-poisioning, mostly with benzodiazepines. As suicide is a multicausal phenomenon, its therapy and prevention should also be complex and gender differences should be taken into account in building up our helping strategies.

Objective. There is an increasing interest in the background of mentalization deficit in schizophrenia. On the one hand, according to developmental psychological studies, mentalization development is connected with the development of pragmatic language skills. On the other hand, studies suggest that mentalization is dependent on the maturation of neurocognitive skills such as executive functions. Our study investigated the role of these domains in the mentalization deficit of schizophrenia. Method. 28 patients with schizophrenia and 20 control patients with depression took part in the first part of the study. Participants were presented first-order and second-order mentalization tasks, metaphor and irony tasks for the assessment of mentalizing skills. The pragmatic language skills were examined by “question and answer” vignettes. 20 patients with schizophrenia took part in the second part of the study. The test battery was completed with a picture recognition task and neurocognitive tests were made by all patients. Results. Patients with schizophrenia performed significantly worse in the irony and pragmatic tasks, but there was no correlation between their performances in the irony and in the pragmatic tasks. Selective attention and verbal working memory showed correlation with the cumulative verbal mentalization index. Selective attention correlated with the recognition of complex mental states from pictures as well, but the successful decoding of complex mental states was dependent on the recognition of basic expressions. Attention correlated with mental state recognition as well. Conclusions. Our results suggest that the mentalization deficits of people with schizophrenia cannot be explained by pragmatic language deficits alone, and the manifest impairment is the consequence of disturbances in multiple cognitive processes. Basic neurocognitive factors such as attention, selective attention and verbal working memory can influence the mentalization skills.

Bupropion has an antidepressant effect through blocking the dopamine transporter. By 99mTcTRODAT-SPECT, we measured the baseline DAT activity of depressed patients. After 3 weeks’ bupropion treatment we studied the change in DAT activity, which corresponds to the occupancy of bupropion. The average occupancy of bupropion on DAT was similar to the international findings at 20,84% in 9 depressed patients.

Effect Of Atypical Antipsychotics On Metabolism

The metabolic effect of atypical antipsychotic drugs may manifest itself in weight gain, disturbances in glucose homeostasis and dyslipidaemia. One confounding factor is that psychotic disorders themselves make the patients prone to specific metabolic changes. Nevertheless clinical studies have confirmed that atypical antipsychotic drugs have a different metabolic effect. In the present prospective case-series, four male antipsychotic drug-naive psychiatric patients without any familial history of metabolic disorder were studied. The patients received risperidone or olanzapine monotherapy for 12 weeks; weight, plasma levels of triglyceride, cholesterol, HDL, and fasting glucose were measured in every 4th week. In two patients, oral glucose tolerance test (OGTT) was also performed at days 0 and 56. The average weight gain during the 12-week period was 12%. The cholesterol and triglyceride plasma concentrations were also elevated. The fasting glucose levels did not change during the observation period. In the OGTT performed in two patients, normal fasting glucose and insulin plasma levels were observed after 8 weeks; however, the plasma insulin concentrations were highly elevated after glucose intake, which may suggest the presence of insulin resistance. Our preliminary results confirmed the previous results on the metabolic effect of atypical antipsychotic drugs, which may lead to metabolic syndrome. The regular control of the metabolic laboratory parameters, early intervention and the modification of the atypical antipsychotic treatment may help to avoid this adverse effect of the drugs.

Three young people developed psychosis during/ after cannabis intake. The 17-year-old male after only a few marihuana cigarettes, the 22-year-old patient after two years of addiction developed schizoid psychosis; the 20-year-old patient after six years of cannabis addiction had schizoaffective psychosis. The firs two patients become symptom-free on the antipsychotics and during the drug-free period. The third patient, who had cannabis during the psychotic symptoms, still has the schizoid psychosis. Conclusions: the connection between cannabis and psychosis is clear in our three patients. Marihuana is working on the dopamin system and may cause schizoid psychosis, sometimes permanent psychosis. Cannabis, this light drug might not a „safe” agent. 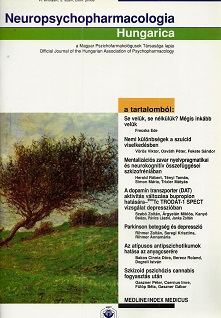