Association of obesity and depression

It has been long known that the frequency of overweight and obese people is higher among depressed and bipolar patients than in the general population. The marked alteration of body weight (and appetite) is one of the most frequent of the 9 symptoms of major depressive episode, and these symptoms occur during recurrent episodes of depression with a remarkably high consequence. According to studies with representative adult population samples, in case of obesity (BMI over 30) unipolar or bipolar depression is significantly more frequently (20-45%) observable. Since in case of depressed patients appetite and body weight reduction is observable during the acute phase, the more frequent obesity in case of depressed patients is related (primarily) not only to depressive episodes, but rather to lifestyle factors, to diabetes mellitus also more frequently occurring in depressed patients, to comorbid bulimia, and probably to genetic-biological factors (as well as to pharmacotherapy in case of medicated patients). At the same time, according to certain studies, circadian symptoms of depression give rise to such metabolic processes in the body which eventually lead to obesity and insulin resistance. According to studies in unipolar and bipolar patients, 57-68% of patients is overweight or obese, and the rate of metabolic syndrome was found to be between 25-49% in bipolar patients. The rate of metabolic syndrome is further increased by pharmacotherapy. Low total and HDL cholesterol level increases the risk for depression and suicide and recent studies suggest that omega-3-fatty acids possess antidepressive efficacy. Certain lifestyle factors relevant to healthy metabolism (calorie reduction in food intake, regular exercise) may be protective factors related to depression as well. The depression- and possibly suicide-provoking effect of sibutramine and rimonabant used in the pharmacotherapy of obesity is one of the greatest recent challenges for professionals and patients alike.

Gender differences in the neurocognitive components of depression

Trichotillomania And Comorbidity – Lamotrigine In A New Perspective

Trichotillomania an impulse disorder that causes people to pull out the hair) is a relatively rare psychiatric illness, though the number of patients in need are definitely much higher than that we encounter in psychiatric practice. According to ICD-10 and DSM-IV-TR trichotillomania is an impulse disorder but latest researches in neurobiology and picture taking procedures seem to provide convincing evidence of it’s being a relative of addictions. The article is a glympse into the core of the newest literature also focusing on therapeutical solutions. The therapeutical effects of mode stabilizers as lamotrigin appear to gain on significance in the treatment of compulsiveimpulsive illnesses such as trichotillomania. The article points out the especially high comorbidity with depression and distimia (OCD) and focuses on the pathoplastic impact of early traumas. In the case study many elements of the complex therapy of trichotillomania are also displayed.

About the Cotard's syndrome

INTRODUCTION, AIMS: The authors present the Cotard’s syndrome, a rare psychiatric condition, pointing out the latest results in terms of etiology and psychoneurology. The central feature of the syndrome is a nihilistic delusion, in which the patient denies his or her own existence and that of the external world. METHOD: We searched electronic databases using the appropriate search terms, relevant articles were carefully reviewed. We present three cases from our clinical practice. RESULTS: After the overview of the latest biological and neuropsychological findings, the historical aspects of the condition, the terminology, the nosology, the classification, the differential diagnostics and the etiology are discussed. The psychopathology and the phenomenology of Cotard’s syndrome are also presented, shedding light on existential aspects as well. To sum up with useful information for the clinical practice, the possible treatment strategies, the course and the prognosis of the disease are also discussed. CONCLUSIONS: The presented theoretical and practical aspects give a lead on deeper understanding, easier recognition and more adequate therapy of the Cotard’s syndrome.

Psychiatric disorders are difficult to explain from an evolutionary aspect, since it is hard to reason how a characteristic carrying a reproductive disadvantage survives through natural selection. There are several evolution-based papers concerning obsessive-compulsive disorder (OCD), which aim at resolving this contradiction. Recent studies provided considerable evidence in support for the evolutionary theories of OCD. Research confirmed an important role for genetic factors in the background of OCD, and neuroanatomic studies supported that neuroanatomical structures playing a role in OCD are those areas which are activated during the processing of danger and threat. From the evolutionary aspect OCD can be explained both from the individual and group selection aspect. According to the theory of individual selection, OCD symptoms are based on such behaviors which are by themselves advantageous serving individual survival and reproduction and therefore carry on through natural selection. According to group selection theory, although OCD is disadvantageous for the individual, it is adaptive for the survival of the group. In our paper we review the individual and group selection theories of OCD, and we also outline the continuity and discontinuity theories which show a significant overlap with the evolutionary theories. We review characteristic age and gender differences related to OCD from this aspect. The evolutionary approach to OCD is important in understanding the background factors, development and symptoms of OCD, which mean new tools in the prevention and treatment of this disorder.

Recognition and treatment of behavioral and psychological symptoms of dementias: lessons from the CATIE-AD study

The prevalence of the behavioral and psychological symptoms of dementia (BPSD) varies between 20-90%, depending on the care settings and severity of the dementia syndrome. BPSD is the major reason for referrals to secondary care. It exacerbates the dementia-associated morbidity and mortality rates. Furthermore, while BPSD is not a properly defined syndrome, it frequently induces psychic and somatic complaints in caregivers. The social and economic impacts of the BPSD far outweigh the importance of the cognitive symptoms of dementia. The aim of this review is to present the most recent findings regarding the recognition, differential diagnosis, aetiology, and pathomechanism of BPSD with a special focus on the local therapeutic possibilities with the atypical antipsychotics. Of utmost importance is the process of identifying the complex bio-psycho-social aetiological factors in parallel with defining the treatment strategies. Only after the correct recognition of the potential aetiology, non-pharmacological interventions are recommended to start with as first choice treatment in mild and mild-to-moderate BPSD, while in moderate and severe cases pharmacotherapeutic approaches are recommended from the start. Recent findings of neuropathological, neurochemical and neuroimaging studies yielded unequivocal evidence that the BPSD symptoms are not a consequence of a single neurotransmitter imbalance, but rather of disproportionate level changes in biogenic amines, excitatory and inhibitory transmitters in the central nervous system. Consequently, the available pharmacotherapy should target the balancing of the dopaminergic, serotoninergic, noradrenergic, excitatory and GABAergic neurotransmission by using antipsychotics, antidepressants, phase-prophylactic agents, and benzodiazepines. Several clinical studies have proven the efficacy of atypical antipsychotics that target multiple neurotransmitter systems in treating BPSD. The first results of the CATIE-AD study also confirm these findings and indicate that the atypical antipsychotics are effective in controlling anger, aggression and delusions in Alzheimer’s disease, while cognitive symptoms, quality of life and care needs are not improved. 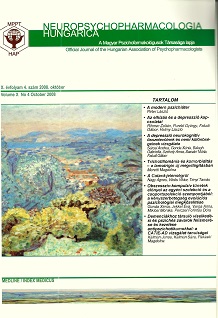