Objectives: Although the number of patients admitted for psychiatric emergency care is increasing according to data from various countries, there are no large-scale studies assessing clinical emergency practice and in several countries no national guidelines have been published concerning emergency care in psychiatry. The aim of our study was to assess practice related to emergency care of agitated-psychotic patients in Hungary. Methods:
Anonymous survey questionnaire with questions related to care of an agitated patient showing psychotic symptoms was dispatched to 210 institutions providing psychiatric care in Hungary in 2013. Results: The overwhelming majority of the 155 participating clinicians would use haloperidol (92.9%) and benzodiazepines (81.3%), 74.8% in a dual combination. 18.7% would apply monotherapy and 5.2% a triple combination of medications. 59.4% would use i.v. and 23.9% i.m. therapy, and 9% would apply the combination of these two. In case of failure of first-line therapy, 76.8% of participants would repeat the previous medication.Conclusions: The aim of our study was to assess emergency interventions in psychiatry focusing on different psychopharmacological approaches. Our results provide a cross-sectional view on current practice in Hungary, and therefore may contribute to outlining practice-coherent guidelines and also provide the opportunity for a comparison with international trends.

Introduction: By analyzing literature data regarding glatiramer acetate in the treatment of relapsing-remitting multiple sclerosis one might find controversial data but the majority of authors state that the clinical evolution under the treatment showes a positive course. Materials and methods: Our goal was to analyze groups of patients, both non-treated and treated with the drug, for relapse rate, Kurtzke’s Expanded Disability Status Scale (EDSS) score, Multiple Sclerosis Functional Composite (MSFC) score – upper limb disability, lower limb disability and cognition, and for cognitive dysfunction, using the Montreal Cognitive Assessment (MoCA) test, in order to objectively quantify the clinical impact of the drug. Results/Conclusions: Our results are in accordance with the literature for most of the investigated measures – relapse rate, EDSS, MSFC –, and furthermore suggest the possibility to use more extensively the MoCA test for evaluation of MS patients from the point of view of cognitive functions, after a much wider comparative assessment

Catatonia and neuroleptic malignant syndrome in view of a psychopathological and pathophysiological overlap: a brief review

Catatonia was first described in the 19th century as a syndrome with motor, affective and behavioral symptoms. During the 20th century it was rather regarded as a rare motoric manifestation of schizophrenia and that classification has almost resulted in the disappearance of catatonia among patients outside of the schizophrenia spectrum. With the introduction of neuroleptics, the incidence of catatonic schizophrenia also declined which was attributed to effective treatment. Simultaneously, neuroleptic malignant syndrome was described, which shows many similarities with catatonia. Recently, several researchers suggested a common origin of the two disorders. In this paper we review case reports of the last five years, in which both neuroleptic malignant syndrome and catatonia had emerged as a diagnosis. Additionally, based on the relevant literature, we propose a common hypothetical pathomechanism with therapeutic implications for the two syndromes. Besides underlining the difficulties of differential diagnosis, the reviewed cases demonstrate a transition between the two illnesses. The similarities and the possible shifts may suggest a neuropathological and pathophysiological overlap in the background of the two syndromes. Electroconvulsive therapy and benzodiazepines seem to be an effective treatment in both syndromes. These two treatment approaches can be highly valuable in clinical practice, especially if one considers the difficulties of differential diagnosis.

Major depressive episode (MDE) is one of the most common psychiatric diagnoses and it has long-term mental and physiological consequences. The status of cognitive functions is of specific importance in case of affective disorders, due to their influence not only on patients’ behaviour, but to a certain extent also on the success of psychotherapy. In addition, examining the impact of mood and affective disorders on cognitive functions also helps us understand the relationship between brain plasticity and neurocognitive networks. While the relationship between explicit, conscious memory and mood are relatively well-explored, the effect of mood and affective disorders on working memory and implicit sequence learning received less attention. The present review aims to overview available results in these less-explored areas. Research suggests that while working memory performance shows impairments in MDE and in some specific mood conditions, effects of affective disorders and mood on implicit sequence learning are more contradictory, highlighting the need for further studies in this field.

Objective: We report a successful treatment with lamotrigine of a patient with hereditary coproporphyria presenting with affective and psychotic symptoms. Case report: M.F., a 38-year-old, single woman was admitted to an acute psychiatric ward because of suddenly emerging psychosis. Ms F’s hereditary coproporphyria was diagnosed 9 years before the current admission. While on treatment with olanzapine (20mg/day) the psychotic symptoms have gradually disappeared. In view of her significant mood fluctuations predominantly with depressed phases, lamotrigine was started and titrated up to 125 mg/day. Ms F’s mood gradually became euthymic, suicidal ideations and anxiety disappeared. At 5-month follow-up, while still on lamotrigine, her porphyria was asymptomatic. Conclusion: To the best of our knowledge, this is the first report about the safe administration of lamotrigine in hereditary coproporphyria. Lamotrigine did not trigger an acute porphyric attack as confirmed by clinical and laboratory findings. 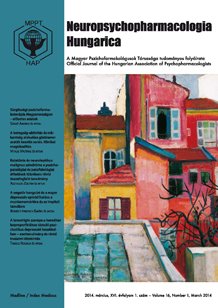