This paper introduces the methods and methodological findings of the National Survey on
Addiction Problems in Hungary (NSAPH 2015). Use patterns of smoking, alcohol use and
other psychoactive substances were measured as well as that of certain behavioural addictions (problematic gambling – PGSI, DSM-V, eating disorders – SCOFF, problematic internet
use – PIUQ, problematic on-line gaming – POGO, problematic social media use – FAS, exercise
addictions – EAI-HU, work addiction – BWAS, compulsive buying – CBS). The paper describes
the applied measurement techniques, sample selection, recruitment of respondents and the
data collection strategy as well. Methodological results of the survey including reliability and
validity of the measures are reported. The NSAPH 2015 research was carried out on a nationally representative sample of the Hungarian adult population aged 16-64 yrs (gross sample
2477, net sample 2274 persons) with the age group of 18-34 being overrepresented. Statistical
analysis of the weight-distribution suggests that weighting did not create any artificial distortion in the database leaving the representativeness of the sample unaffected. The size of the
weighted sample of the 18-64 years old adult population is 1490 persons. The extent of the
theoretical margin of error in the weighted sample is ±2,5%, at a reliability level of 95% which
is in line with the original data collection plans. Based on the analysis of reliability and the
extent of errors beyond sampling within the context of the database we conclude that inconsistencies create relatively minor distortions in cumulative prevalence rates; consequently the
database makes possible the reliable estimation of risk factors related to different substance
use behaviours. The reliability indexes of measurements used for prevalence estimates of
behavioural addictions proved to be appropriate, though the psychometric features in some
cases suggest the presence of redundant items. The comparison of parameters of errors beyond
sample selection in the current and previous data collections indicates that trend estimates
and their interpretation requires outstanding attention and in some cases even correction
procedures might become necessary.
Keywords: addictive behaviours, general population survey, representative data collection,

Background: Psychotic symptoms are common in the case of manic, depressive and mixed
episodes of bipolar disorder; however, the assessment of delusions and hallucinations is frequently improper, thus the patients presenting also psychotic symptoms are treated based on
their diagnosis of schizophrenia, schizoaffective disorder or paranoia. Psychotic symptoms in
bipolar disorder result less favourable outcomes and course of illness. Methods: 365 patients
(106 males, 259 females) were hospitalized in or institution from January 1st 2015 to September 30th 2016, who were diagnosed with bipolar disorder according to the ICD-10 criteria.
The number of patients presenting psychotic symptoms was 89 (24%); 55 of whom (62%)
belonged to the bipolar I, and 34 (38%) belonged to the bipolar II group. As a control group of
the psychotic bipolar patients, we chose 80 bipolar patients hospitalized in the above mentioned period, who did not present psychotic symptoms either at the current or their previous
hospitalizations. Results: We found psychotic mania in the case of 24 patients (27%, 12 males,
12 females); and the delusions were of grandiose, religious and paranoid content. The number
of depressive patients presenting psychotic symptoms was 39 (44%, 30 females, 9 males); their
delusions were dominantly characterized by feelings of guilt, hypochondria and impoverishment. We treated 26 patients (29%, 18 females, 8 males) with mixed episodes accompanied
by psychotic symptoms; they were characterized by depressive delusions. Compared to the
non-psychotic bipolar patients, in the case of psychotic bipolar patients manic and depressive
episodes, bipolar I diagnosis, early onset of the disease (under the age of 20), previous suicide
attempts and comorbid personality disorder were significantly more frequent at the time of
hospitalization, whereas mixed affective episodes and bipolar II diagnosis dominated in the
non-psychotic group. Similarly, the residual symptoms were more common in the psychotic
group (64 patients 72% vs 34 patients 43%) and previous hospitalizations was higher in the
psychotic group (males 10.6, females 12.5 vs. males 7.8, females 8.6). With regard to psychotic
symptoms, there was no difference between the two groups in terms of positive family history,
comorbid anxiety disorder or alcohol dependency. Conclusions: Early onset of the disease,
bipolar I diagnosis and comorbid personality disorder were typical of psychotic bipolar patients;
in addition, suicide attempts and residual symptoms were more common compared to the
non-psychotic group. Limitations: The relatively lower number of patients (89 and 80 patients)
and the fact that the data were processed retrospectively limit the generalizability of our results.

New aspects in the pathomechanism of diseases of civilization, particularly psychosomatic disorders. Part 1. Theoretical background of a hypothesis

New aspects in the pathomechanism of diseases of civilization, particularly psychosomatic disorders. Part 1. Theoretical background of a hypothesis

The stress defence-cascade is mostly not biphasic as Cannon thought, the sympathicotonic stress response is preceded by a vagotonic phase called freeze response. Alteration of the carbon dioxide level plays an important role during defence-cascade as its changes interfere with stress hormones, e.g. with catecholamines, thus affecting the degree of arousal. In case of humans, learned behaviour dominates instead of instinctive, so the fight-or-flight often lags; the consequence can be persistent hypocapnia or hypercapnia. The hypoventilation or hyperventilation may continue even after a stressful situation, as tissular and renal compensation stabilizes and makes the pathological breathing patterns chronic. The organism tries to restore the original milieu intérieur (sec. Claude Bernard), but this cannot succeed without restoring pCO₂. The regulation operates the preservation of intracellular and extracellular pH as a priority, while neurohumoral compensations change the ionic milieu in the body’s cells. Present hypothesis specifies the permanent lack or excess of carbon dioxide which can cause allostatic load by psychosomatic pathomechanism. Carbon dioxide is equivalent to stress hormones; its alterations become a means of somatization, resulting in ion-pattern changes in intracellular and extracellular spaces, consequently causing disintegration of the body’s function. (See also: network theory, ripple effect, metabolic remodeling.) Intracellular ion-pattern alterations emerge new genetic phenotypes to the surface. The variety of phenotypes explains the diversity of induced diseases. The theory appreciates the role of ions by considering the instantaneous ion pattern of the cytoplasm (all the ions together) as a decisive second messenger.

Keywords: carbon dioxide as a link between psyche and soma, idea of restoring the milieu intérieur, intracellular ion-pattern as a second messenger, updating of the human stress response

About the association between antipsychotic medication and cardiovascular morbidity: epidemiology and possible background mechanisms

The history of antipsychotics began with the discovery of chlorpromazine in the 1950s.
Since then this group of medications has become one of the most important element of the
armamentarium of psychopharmacology. While initially these pharmacons were used in the
treatment of psychotic states (including psychotic mania) in the last approximately 10-15
years new indications – such as treatment of depressive, manic and mixed states and also
mood-stabilization in bipolar disorder and also the treatment of major depressive disorder
– for several second-generation antipsychotic (SGA) agents have been introduced. Taking
this fact into consideration it is not surprising that the market of SGAs has been broadened
in several countries. At the same time, safety issues have been raised related to some SGAs,
mainly because of their adverse cardiometabolic effects (e.g. weight gain; dyslipidemia;
disturbances of glucose metabolism). Related to this, it is worthy of note that the lifespan
of patients with serious mental illness (SMIs, such as schizophrenia; bipolar disorder; major
depression) is shorter than their healthy counterparts and that somatic comorbidities (mainly
cardiovascular disorders) of these patients are primarily responsible for this fact. In this paper,
firstly we briefly discuss the history and features of APs then we present data on the shorter
than expected lifespan of patients with SMIs and also the possible background mechanisms
of it (including the supposed role of AP treatment). Then we provide a short discussion on
endothelial progenitor cells (EPC), their role in cardiovascular system and related clinical
relevance. Eventually, we also discuss our pilot study with the aim to reveal whether there is
any effect of AP therapy on the number of CD34/KDR double-positive EPCs. 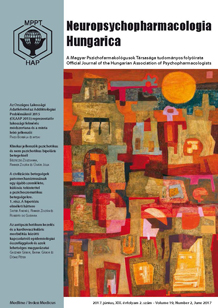