Thomas A. Ban and Andrea Tone

On July 25, 2017, Peter Gaszner, a close friend and a member of our International Network for the History of Neuropsychopharmacology, passed away.

All through his professional career Peter was involved in research. In the 1970s his research interest was focused on atropine coma therapy and on epilepsy and anticonvulsants (Ban 2011; Faludi and Ban 2001). In a series of studies conducted in the early 1980s in normal subjects, in collaboration with Elemer Szabadi and Christopher Bradshaw, he demonstrated differences in peripheral anticholinergic activity among tricyclic antidepressants. They had also shown adrenergic blocking effect with neuroleptics (Gaszner, Szabadi and Bradshaw 1980; Szabadi, Gaszner and Bradshaw 1980, 1981). In the 1990s, Dr. Gaszner was a member of the international team which demonstrated the efficacy of reboxetine in major depression (Ban, Gaszner, Aguglia, et al 1998). At the time he was Visiting Professor in our Division of Psychopharmacology at Vanderbilt University, in Nashville we collaborated in developing a Composite Diagnostic Evaluation of Hyperthymic Disorders to study the therapeutic profile of drugs used in the treatment of mania (Gaszner and Ban 1998).

On December 15, 2004, Peter Gaszner (PG) was interviewed by Andrea Tone (AT) at the annual meeting of the American College of Neuropsychopharmacology (ACNP) in San Juan, Puerto Rico. His edited interview (see below) was first printed in volume 8 of ACNP’s Oral History Series (Ban 2011; Salzman 2011).

Assessing suicide risk based on a hierarchical classification of risk factors

Suicide risk factors could be organised into a hierarchical order and a questionnaire constructed
based on this hierarchical structure may help clinicians assess suicide risk. The paper presents
analysis of the clinical utility of a questionnaire developed by the authors, in samples of suicidal and nonsuicidal psychiatric patients as well as among normal control subjects. Based
on their results the authors suggest a shorter and expectedly more sensitive, 6-item version
instead of the original 12-item version scale.

The importance of anxiety and depression in family practice

Representative studies indicate that prevalence of anxiety disorders among adults is between
12.6-17.2%, while in Hungary it is 17.7%. According to both international and national studies
the point prevalence of diagnosed major depression requiring treatment is 6-10 % in general
practice. As untreated depression is the most important risk factor for suicide, early detection
and effective management of depression are critical in prevention. According to international and national studies the recognition of major depression in primary care significantly
contributes to the decline of suicide mortality. In our article we review screening of anxiety
and depressive disorders and treatment and management of these patients in primary care.
We present two short questionnaires used for recognizing depression and acute suicide risk
and describe their use in family/ general practice.

The frequent psychiatric comorbidity in epilepsy compromises the quality of life of those
affected, further increasing their suicide risk and the high burden of stigmatisation. Out of
adulthood epilepsies, mesio-temporal lobe epilepsy carries the highest cognitive and psychiatric risk, making mental health comorbidities its inherent features. The pathomechanism
of the epilepsy-related mental health symptoms and conditions appears to be related to
undetected subclinical seizures, postictal exhaustion and inhibition, and the non-REM sleep
related interictal epileptic activity. In our work we try to present some of the typical psychiatric
syndromes and conditions seen in epilepsy. We aim to highlight the difficulties of treatment
on the borderline of neurology and psychiatry.

The authors seek to find new connections between recent results of biology and older theories. This paper aims to assemble the jigsaw puzzle. The theoretical background of the hypothesis was described in the previous issue of the journal (Sikter et al. 2017a). Human stress response often coexists with persistent hypocapnia or hypercapnia – developing via psychosomatic pathomechanism – which can lead to mental and psychosomatic illnesses. Chronic hypocapnia mainly generates hyperarousal disorders which may be reversible for an extended time, however, vicious cycles may start when hypoxia and/or severe somatic diseases are simultaneously present (commonly in the elderly), which conditions often end with death without medical help. Chronic hypercapnia devastates the organism initially without symptoms, partly due to neurohumoral contraregulation, consequential dysregulation and metabolic remodeling. Psychosomatic disorders (e.g., diseases of civilization that evolve in people with disadvantaged psychosocial situations) develop over years and decades, causing irreversible changes. Hypercapnia usually occurs in clinical pictures of chronic obstructive pulmonary disease, obesity hypoventilation syndrome, obstructive sleep apnea, and its unobstructed version (sleep-related hypoventilation), generating various organic disorders (hypertension, type 2 diabetes, cardiovascular disorders, immunological diseases, depression, etc.). Because of the above, chronic hypocapnia and hypercapnia cannot be regarded as harmless accompanying phenomena. That is why we have to strive for restoring eucapnia and normalizing the induced ionic changes, which does not appear to be a hopeless task.

Keywords: depression as an extreme hypoarousal, diseases of civilization, idea of restoring the milieu intérieur, remodeling of metabolism 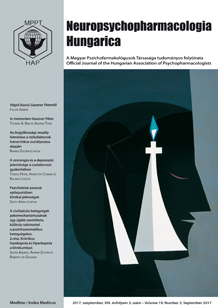