A branch of computational psychiatry aims to handle the problems which arose due to the heterogeneity and comorbidity of mental illnesses by capturing phenotypic differences behind symptoms. In order to more accurately describe the mechanisms of the mind and its disturbances, it uses the tools and methods of computational cognitive science. In this paper, we introduce the reader to the (mathematical) language in which (Bayesian) predictive coding was written, which holds one of the possible explanations of the perceptual differences found on the autism or the psychosis spectrum. By representing prior knowledge and sampled sensory information as (prior and likelihood, respectively) distributions, the Bayes-rule allows us to calculate the inferred posterior distribution. The aforementioned terms are introduced through simple examples, such as coin tosses (inferring how biased it is) or making a diagnosis, however, this framework might also help us understand the more complex mechanisms of the mind. Studies show that visual perception can be examined following Bayesian formalization. The likelihood information can be manipulated with bistable or noisy stimuli, whereas through instructions and/or cues, prior expectations are formed. With the use of perceptual and response models fitted to cognitive task performance, it becomes possible to identify parameters which shed light on the features of information processing that characterize the perceptual alterations in certain clinical populations. At the end of the paper we draw attention to the limitations of computational modelling.

Prescribing antidepressant medication is currently the most effective way of treating major depression, but only very few patients achieve permanent improvement. Therefore, it is important to identify objectively measurable markers for effective, personalized therapy. The aim of this review article is to collect all the markers that are robustly predictive of the outcome of therapy. We searched for systematic review articles that have simultaneously investigated the effects of as many different markers as possible on the response to antidepressant therapy in major depressive patients. From these we extracted markers that have been found to be significant by at least two independent review studies and that have proven replicable also within each of these reviews. A separate search was performed for meta-analyses of pharmacogenetic genome-wide association studies. Based on our results, onset time, symptom severity, presence of anhedonia, early treatment response, comorbid anxiety, alcohol consumption, frontal EEG theta activity, hippocampal volume, activity of anterior cingulate cortex, as well as a peripheral marker, serum BDNF levels have proven replicable predictors of antidepressant response. Pharmacogenomic studies to date have not yielded replicable results. Predictors identified as robust by our study may provide a starting point for future machine learning models within a ‘big data’ database of major depressive patients.

Objectives: Clozapine-induced myocarditis may be a hypersensitivity reaction due to titration that was too rapid for a patient’s clozapine metabolism. Obesity, infections, and inhibitors (e.g., valproate) may lead to clozapine poor metabolizer (PM) status. The hypothesis that 4 patients with clozapine-induced myocarditis from two United States hospitals were clozapine PMs was tested by studying their minimum therapeutic clozapine doses and titrations. Methods: Using methodology from a prior myocarditis case series of 9 Turkish patients, we studied: 1) the concentration-to-dose (C/D) ratio; 2) minimum therapeutic dose required to reach 350 ng/ml (a marker for PM status); and 3) titration speed. Results: All 4 patients were possible clozapine PMs (their respective minimum therapeutic doses were: 134, 84, 119 and 107 mg/day). The identified possible contributors to clozapine PM status were: 1) valproate in Cases 1, 2 and 4; 2) obesity and a urinary tract infection in Case 2; and 3) obesity and very rapid titration in Case 4. Case 3, who was given a normal US titration, appeared to be a genetic clozapine PM. He developed clozapineinduced drug reaction with eosinophilia and systemic symptoms (DRESS) syndrome after rechallenge using 12.5 mg/day > 3 months later. The results were similar to 9 Turkish cases, all of which were PMs (6 on valproate, 4 with obesity, 1 with infection and 1 possibly genetic). Conclusions: Future studies using clozapine levels and considering the role of clozapine PM status should explore whether or not all cases of clozapine-induced myocarditis could be explained by lack of individualized titration.

What you see is what you get? Association of belief in conspiracy theories and mental health during COVID-19 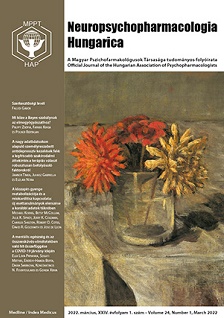