OBJECTIVE: The cyclic variation of physical and psychological phenomena has been accepted as a natural consequence of the cyclicity of the human female reproductive function. The exact nature of these changes, however, has not been fully understood. The aim of our study was to investigate the fluctuation of psychological and physical symptoms throughout the female reproductive cycle in healthy, non-PMDD women.

METHOD: 63 psychiatrically healthy, non-PMDD women with normal regular menstrual cycles and not using hormonal contraceptive methods participated in the study. Participants completed the PRISM calendar every night for three consecutive cycles and on three predefined days of the first cycle they completed several other psychometric measures (SCL-51, STAI, ZSDS, EAT and Mind and Body Cathexis Scale). Based on an at least 66% increase in physical symptoms from the late follicular to the late luteal phase on the PRISM, subjects were assigned to LPPS (luteal phase physical symptoms) and nonLPPS (no luteal phase physical symptoms) groups. Average of psychometric scores obtained at the three predefined days were compared between the two groups.

RESULTS: There was a significant difference between the two groups only in case of the interpersonal sensitivity subscale of the SCL-51.

Ayahuasca versus violence – a case report.

INTRODUCTION: There are altogether four reported cases in the literature about psychotic episodes associated with sibutramine, which has been registered as an appetite suppressant for 10 years. OBJECTIVE:Authors review the case of a patient who, after being on sibutramine for three weeks, passed gradually into a psychotic state. CASE SUMMARY: A 39-year-old white woman started to take sibutramine to lose weight at a dosage of 10 mg/day. After taking the pill for two weeks her behavior changed basically, she neglected her tasks and irrealistic thoughts appeared in her mind. Later, she recalled these weeks as if they had been a dream. In two weeks time after spontaneous abrupt of sibutramine intake symptoms disappeared without any treatment. The examination did not reveal organic disturbances or psychiatric illnesses. DISCUSSION: The result of the psychological examination rendered it probable, that the multitude of severe difficulties the patient had experienced in her life before she developed a pathological condition had weakened her psychic defense mechanism, making her vulnerable to the drug’s psychosis-inducing properties. The correlation between the symptoms and sibutramine intake according to the Naranjo ADR scale is “probable”. CONCLUSION: On the basis of this case, authors suggest that those persons exposed to increased stress or being vulnerable to psychosis in any other way should take sibutramine with extra caution and under close supervision only. 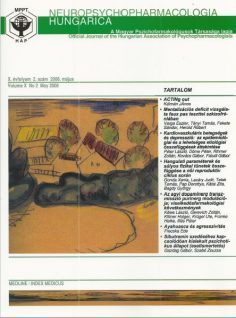