INTRODUCTION: The multidimensional approach of the ethiopathogenesis of eating disorders include the genetic, biologic, psychosocial effects, and premorbid personality markers. AIM/METHOD: To determine the potential relation between genetic and personality trate and state factors, and also to investigate the connection of clinical symptoms and diagnostic subgroups. The serotonin transporter gene (VNTR) polymorphism was investigated by polymerase chain reaction (PCR) technology, the personality factors were determined by the Temperament and Character Inventory (TCI) inventory.

RESULTS: Among patients with bulimia nervosa (BN) the short allele of serotonin transporter gene was more frequent than in anorexia nervosa (78% vs. 67%), and in both groups it was more common than in the general population (43%). Patients with anorexia nervosa (AN) have higher scores in the scale of harm avoidance (61,2 vs. 51.4), but in bulimia nervosa the novelty seeking (54.5 vs. 44.2) and the reward dependence factors (53.2 vs. 46.5) were more significant. In the self-directedness (BN: 42.7; AN: 44.3) and the cooperativeness scales (BN: 51.2; AN: 44.6) both groups show lower scores, which could implicate personality disorder in the background of the eating disorders. Anorexic patients with the 10 allele show similar personality factors like patients with bulimia nervosa, while with the 12 allele (homozygotes), their factors were more likely the factors of patients with classic anorexic symptoms.

CONCLUSION: Our data strength the role of specific personality factors in the background of the symptoms of eating disorders. Among patients with bulimia nervosa the 10 allele were more frequent, which could indicate the role of the serotonin system in developing eating disorders. Two subgroups were differentiated among patients with anorexia nervosa in relation with personality factors; the factors of patients with the 12 allele homozygotes were similar to the classical factors of anorexia nervosa, while patients with the 10 allele were like bulimic patients. Our results could improve our knowledge with newer aspects concerning the etiology of eating disorders, that might be used in broadening our preventive and therapeutic facilities in the future.

Neuropsychological deficits have been reported in patients with major depressive disorder in a lot of lectures. The aim of the present study was to measure the neurocognitive functions of major depressive patients and healthy controls, and identify some vulnerability marker of the disease. Seventy-one patients with major depressive disorder were compared to thirty healthy control subjects on tasks from Trail Making Test, Stroop Test, Rey Verbal Auditory Learning Test and Rey-Osterreith Figure Test. Patients with depression relative to controls were significantly impaired on tasks of attention, executive function, memory and psychomotor speed, but not in visuo-spatial function. These findings suggest deficits in cognitive function as, attention, visual and verbal memory and learning, as vulnerability marker for major depressive disorder. The second important finding, the better result of the visual perception and short memory in depressed patient, was caused by intact hippocampal function. The functional importance of this result is the connection of the neuronal network and signs of depression.

Mental Retardation In Childhood. The Prevalence Of Informative Morphogenetic Variants

The authors observed the prevalence of informative morphogenetic variants among mentally retarded children. In their retrospective examination of a 4-years period, they included 135 hospitalized children and analysed their clinical epidemiological and dysmorphic profiles. In their descriptive analysis they found ear abnormalities and abnormal head circumference as the most common dysmorphic sings among mentally retarded children, and they emphasize the highly different importance and predictive-diagnostic value of minor malformations and phenogenetic variants.

The steps taken for the discovery of the hallucinogenic effects of N.N-Dimethyl-tryptamine (DMT) is described. DMT had a difficult first 50 years in medical research primarily for legal reasons as it was classified as one of the “drugs of abuse” by authorities in the USA and by the World Health Organization. It has not proved to be a “schizotoxin” as it was first suspected, but the book is not closed on its potential role in some other, high level function as an endogenous neuromodulator. Further clinical work may even substantiate its usefulness in therapeutic application, such as an adjunct to psychotherapy, perhaps not by itself, but in a modified form, or in combination with other substances.

Successful clozapine treatment of primary polydipsia associated with hyponatraemia in a schizophrenic patient. A case report

Polydipsia is the intake of more than 3-4 litres of fluids per day. Primary polydipsia (PP) occurs when excessive fluid intake cannot be explained by an identified medical condition. PP has a prevalence varying between 6% and 20% in the population of chronically hospitalized psychiatric patients. Hyponatraemia–sometimes with severe somatic consequences–developing in 25-86% of these patients. We discuss the case of a schizophrenic patient who had polydipsia, polyuria and hyponatremia without any known medical conditions in the etiological background of these symptoms. In accordance with data of literature, clozapine medication was effective in the treatment of this severe condition. 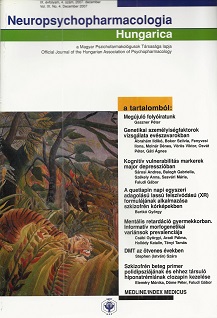