Prevalence of major depression in primary care practices in hungary

The decoding of the flouting of the Gricean relevance maxim is impaired in mental retardation caused by perinatal hypoxia. A brief report

The birth of the convulsive treatment

The history of the first convulsive treatment is summarized here in commemoration of its 75th anniversary. The neuropathological and clinical findings underlying the theoretical basis of the method are reviewed, together with the case histories of the first batch of patients who underwent convulsive therapy. The early indications and effectiveness of convulsive therapy are also discussed. Finally, in a broader context, the role of convulsive treatment in the development of modern biological psychiatry and Laszlo Meduna’s contribution to this development are touched upon.

Atypical antipsychotics are now widely used in the acute and long-term treatment in bipolar disorder. The role of atypical antipsychotics as acute agents, add-on medications; or as primary mood stabilizers in different phases of bipolar disorder is an important current research tendency. However, in bipolar disorder the mostly used indication of quetiapine is the management of acute manic phases, clinical data and the actual research results suggest that it may have both antidepressant and long-term antimanic effects. Quetiapine enhances the transmission of the central serotonergic networks, by its high antagonistic affinity for 5-HT(2A) and partial agonistic activity for the 5-HT(1A) receptors. The 5HT(1A) partial agonism causes an increase in the dopaminergic neurotransmission of the prefrontal cortex, and also, the affinity for the alpha 2-adrenoceptor brings a relative increase in extracellular noradrenergic release an tone in the prefrontal cortex. Latest research shows that quetiapine’s main, active, human plasma metabolite, N-desalkyl quetiapine (norquetiapine), has a high inhibition affinity for the noradrenergic transporter. These data suggest that comparing to other atypical antipsychotics, norquetiapine may have a relatively strong antidepressant potential. Modifying the dopaminergic transmission by quetiapine’s D2 receptor blocking activity results indirect mediating the cAMP-PKA and the arrestin-Akt-GSK-3 intracellular signal transduction pathways, which process may explain its long-term antimanic and mood stabilizing capability. Quetiapine’s activity on nerve growth factors, histamine H1 receptor, proinflammatory networks may take an important additional part in its efficacy in bipolar depression. Its very fast dissociation from the D2 receptor is an important pharmakokinetic parameter for managing the optimal quetiapine dose in the daily clinical practice. This review tries to organize the actual information on quetiapine’s multiplex activity in bipolar disorder.

Generic quetiapine in the treatment of acute schizophrenia and schizoaffective disorder

OBJECTIVES: The aim of the study was to assess the efficacy, tolerability and safety of the own developed generic quetiapine, Ketilept (EGIS Pharmaceutical Ltd, Budapest) in patients with an acute episode of schizophrenia and schizoaffective disorder. METHODS: These was a multicenter, non comparative, open label, 12-week trial on oral generic quetiapine conducted in 110 patients with DSM-IV acute schizophrenia or schizoaffective disorder. Patients received Ketilept 50 mg on day 1, 100 mg on day 2, 200 mg on day 3, 300 mg on day 4. The flexible dosing (150-750 mg/day) started on day 5. Patients were evaluated at baseline, at day 7, 14, 28 and 84. Baseline and outcome assessment included Positive and Negative Syndrome Scale (PANSS), Clinical Global Impression Severity of Illness Subscale (CGI-S) and Global Improvement Subscale (CGI-I), Subjective Well-being on Neuroleptics Scale (SWN), Simpson-Angus Extrapyramidal Rating Scale (SAS), Barnes Akathisia Rating Scale (BARS) and UKU Side Effects Rating Scale (UKU). Changes in overall body weight, body mass index (BMI) and abdominal circumference were also evaluated. RESULTS: After 12 weeks on Ketilept therapy, significant improvements were observed on all major symptoms measures and subscales. 44 (44%) of patients were rated much or very much improved on CGI-I at week 12. The mean SAS and BARS score significantly reduced during the generic quetiapine treatment period (p = 0.0001, p = 0.001). No change was found in the body weight, BMI and abdominal circumference during treatment with Ketilept for 12 weeks. The most common side effects were sedation, and dizziness. 14 adverse events occurred in 6 subjects (5%), of whom 3 patients (2.7%) encountered 3 serious adverse events. The adverse events were mainly mild and moderate. 103 patients (93.6)% completed the study, 2 patients (1.8%) were discontinued from the study due to serious adverse events (insufficient clinical response, sedation). CONCLUSION: Despite the limitations of the design, our results suggest that the generic quetiapine, Ketilept in patients with acute schizophrenia and schizoaffective disorder is therapeutic equivalent to the innovator drug in terms of efficacy, tolerability and safety.

Recent neurobiological and clinical studies demonstrated that neuroplasticity, a principal mechanism of neuronal adaptation and survival, was disrupted in major depression and in long-term stress. Increasing research data show, that structural remodeling and maladaptive dysfunction of certain brain regions is a main component of major depressive illness. Tianeptine, an “atypical” antidepressant, which has a pharmacological action different from the “typical” reuptake blocking agents, underlined a re-evaluation of the neurobiological basis of major depression and revealed that the disorder cannot be explained only by the classic monoamine hypothesis. Neuroplasticity hypothesis of major depression brings the possibility to make important contributions to the diagnosis, however, it may helpful in the understanding the detailed subtle drug effects, which cannot be revealed by pure neurochemical mechanisms. In this review, effects of tianeptine on neuroplasticity, neuroprotection, neurogenesis, hippocampal stress response, long term potentiation, and, as well as on the glutamatergic system and other neuronal networks are evaluated. 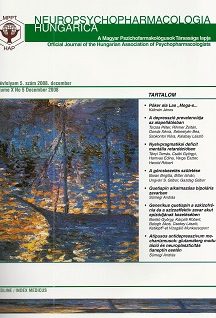