Investigating initiation of smoking behavior and factors involved in developing nicotine dependence is an important health issue worldwide. Various environmental, psychological and genetic risk factors are studies in the background of this complex behavior. The self-medication hypothesis may account for the increased prevalence of smoking behavior and more pronounced nicotine dependence among psychiatric patients. The present study investigates smoking habit and dependence measures in 133 Caucasian patients diagnosed with major depression. Investigated categorical endophenotypes included of smoking behavior included non-smokers who never smoked (1), non-smokers who smoked previously (2), occasional present smokers (3), and regular present smokers (4). Dimensional endophenotypes of nicotine addiction have been characterized by Hungarian adaptations of the Hooked on Nicotine Checklist and the Fagerström Test for Nicotine Dependence. Polymorphic regions of the dopaminergic system have been included as candidate genetic factors including the repeat polymorphism in the III. Exon of the DRD4 (DRD4 VNTR), two promoter SNPs of this gene (-521 CT and -616CG), as well as the repeat polymorphism of the dopamine transporter (DAT VNTR) polymorphism and the Val/Met polymorphism of the catechol-O-methyltransferase (COMT) gene. No significant difference was found between the genotype distributions in the four categories of smoking behavior. However, a significant association is reported with nicotine addiction of patients with major depression using the dimensional approach: patients with the C allele showed lower average scores on the Nicotine Checklist (CC or CT: mean score=6.83.4) as compared to those without the C allele (TT: mean score=10.12.5), these differences were significant (p=0,003).

Chronobiological problems are always present as aetiological or pathoplastic conditions almost in all psychiatric disorders and considered as the greatest contributors to the mood and sleep disorders associated problems. The present review summarise the recent advances in the chronobiology research from the point of the clinician with particular emphasis on the psychobiology and pharmacotherapy of the depression. Human behaviour builds up from different length of circadian, ultradian and seasonal rhytms, strictly controlled by a hierarchical organisation of subcellullar, cellular, neuro-humoral and neuro-immunological clock systems. These internal clock systems are orchestrated at molecular level by certain clock genes and on the other hand – at neuro-humoral level – by the effect of the sleep hormone, melatonine, produced by the neurons of the suprachiasmatic nucleus (SCN). Beside the biological factors, social interactions are also considered as important regulators of the biological clock systems. The pacemaker centers of the SCN receive efferents from the serotoninergic raphe nuclei in order to regulate stress responses and neuroimmunological functions. The direction and the level of the chronobiological desynchronisation could be totally divergent in the case of the different affective disorders. Different chronobiological interventions are required therefore in the case of the advanced and delayed sleep disorders. Sleeping disorders are considered as the most recognised signs of the chronobiological desynchronisation in depression, but these symptoms are only the tip of the iceberg, since other chronobiological symptoms could be present due to the hidden physiological abnormalities. The serum melatonine profile is considered to be characteristic to age, gender and certain neuropsychiatric disorders. The natural and synthetic agonist of the melatonine receptors could be used as chronobiotics. The recenlty marketed agomelatine with a highly selective receptor binding profile (MT1 and MT2 agonism and 5HT2C antagonism) targets the desynchronised circadian rhytm in affective disorders and it has mainly antidepressive effect. Among the non-pharmacological chronobiological interventions, the different forms of the sleep deprivation, light and social rhytm therapies could offer alternative treatment options for the clinician.

Antidepressant action of tianeptine is connected with accelereration of serotonin turnover in the synapse: a hypothesis

Based on the results of our investigation of patients with anxious depression under the treatment with serotonergic antidepressants with different mechanism of action on serotonin reuptake we, the first time in the literature, propose the hypothesis about neurochemical mechanism of tianeptine action. According to this hypothesis tianeptine not only activates serotonin reuptake into the synaptic ending but also activates its release from the ending into the synaptic cleft thus accelerating serotonin turnover rate in the synapse. Proposed mechanism mainly refers the first, acute phase of its action directed to the normalization of serotonergic neurotransmission.

SNAP-25 (synaptosomal-associated protein of 25 kDa) is an integral part of SNARE (soluble N-ethylmaleimide-sensitive factor attachment protein receptor), a docking complex for synaptic vesicle exocytosis and neurotransmitter release. Results with SNAP-25 deficient mouse models highly accelerated association studies of SNAP-25 as a candidate gene for psychiatric disorders, such as Attention Deficit Hyperactivity Disorder (ADHD) and Schizophrenia. Candidate gene studies implicate a large number of single nucleotide polymorphisms (SNPs). Among the numerous SNPs, the miR SNPs are novel functional variants affecting the binding of specific microRNA to their target mRNA. According to our in silico studies there are two putative miR SNPs in the 3’untranslated region (3’UTR) of the SNAP-25 gene. If the putative miR SNPs are shown to have a function in vivo their implication in further psychogenetic association studies will have a higher impact.

Heroin dependence is a disorder with complex inheritance. It is influenced by multiple genetic and environmental factors. This paper gives an overview on the specific risk factors in the background of heroin addiction, especially within the dopaminergic system, which is one of the most important components of the brain’s reward system. In connection with the development of heroin addiction the role of the dopamine D2 and D4 receptors, the dopamine transporter and the catechol-O-methyltransferase genes is discussed. Certain polymorphisms of the most extensively studied dopamine D2 receptor gene show strong association with heroin dependence. Dopamine D4 receptor and catechol-O-methyltransferase genes are also associated with the disease, but some results are still controversial. Only few studies have been done in association with the dopamine transporter gene and substance misuse and no convincing results have been found. To unravel the contradictions and better understand the pathogenesis of the disease more research needs to be conducted.

Post-partum delusion of pregnancy: an integrated view. Case study and review of the literature

Use of hunperdal richter in psychiatry

Pharmakotherapy of schizophrenia can called effective from the 1950 years, by using „first generation antipsychotics” (FGA) – as now we call them. Effective complex pharmacotherapy, psychotherapy and sociotherapy (psychiatric rehabilitation) changed the process and outcome of schizophrenic illness. Use of „second generation antipsychitics” (SGA) became wildely int he 1990 years. They are effective in the therapy of schizophrenic and bipolar patients, due to metaanalyses in literature and practice. In bipolar cases SGA are effective in treatment of acute mania, and in maintaining phase, as mood stabilizer. Risperidone is one of the best, most succesfull SGA. Authors present the use of generic risperidone, Hunperdal Richter in five case reports. Four schizophrenic and one bipolar patients are demonstrated. After improveing the positive psychotic signs maintaining therapy was succesfull. Quality of life, therapy adherence get better and some patients take part in psychotherapy, too. 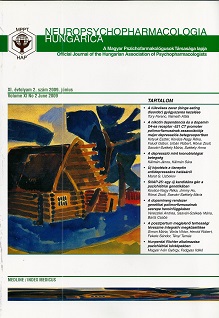