Glial cell line-derived neurotrophic factor (GNDF) plays an important role in the development
and synaptic plasticity of dopaminergic neurons, thus it could be an important therapeutic
factor in Parkinson’s disease. Results from candidate gene studies of GDNF in psychiatric disorders are contradictory. Moreover, the possible association between GDNF polymorphisms
and major- or bipolar depression has not been studied to date. Recently, our research group
has published an association between two GDNF polymorphisms (rs3812047, rs3096140) and
the individual variability of anxiety measured by the Hospital Anxiety and Depression Scale
(HADS) on a non-clinical sample. In the present study we further analyzed this association
on a sample with major- and bipolar depression: we used data from 183 MDD, 116 BP, and
1172 control subjects and tested effect of GDNF rs3812047 and rs3096140 polymorphisms on
mood disorders. The case control design did not show significant differences in the genotype
distribution of BP or MDD versus control patients. However, in the bipolar group subjects with
rs3812047 A allele showed a significantly higher anxiety and depression mean score then
subjects with G allele (p=0.043). This result supports our previous findings demonstrated
on a non-clinical sample. Interestingly we found an opposite effect of the rs3812047 using
data from MDD patients: subjects with the G allele had higher depression scores (p=0.012).
An interaction effect of patient subgroups and genetic variants of the rs3812047 was observed
for both HADS subscales (anxiety: p=0.029; depression: 0.004). In summary, we confirmed the
previously published association between the rs3812047 A allele and mood characteristics
on the bipolar sample, and an effect in the opposite direction was detected in the patient
group with major depression. .

Quality of life of patients with attention-deficit/hyperactivity disorder: systematic review of the past 5 years

Aims: Attention-deficit/hyperactivity disorder (ADHD) is one of the most prevalent childhood disorders which continues into adulthood in 30-60%. Many studies are interested in
the examination of the impact of ADHD on QoL. The aim of the current study is to provide
a systematic review of QoL studies in both children and adults with ADHD published in the
past five years focusing on three domains: 1. The impact of ADHD on QoL 2. The impact of
ADHD on QoL regarding age 3. The impact of ADHD on QoL regarding gender. Method:
A systematic literature search was conducted using the following databases: sciencedirect.com
and MEDLINE from 2008 to 2012. The following keywords were searched: quality of life, QoL,
attention deficit/hyperactivity disorder, ADHD, gender differences, gender-related, age differences, age-related. We included studies into our review which investigated both adults and
children. Papers in English, German and Hungarian were included. Results: Fourteen relevant
articles were identified, among them 13 articles were in English, one in German and there
were no articles in Hungarian. All of the 14 articles confirmed the negative effects of ADHD
on QoL. Four studies dealt with the effects of ADHD on QoL regarding age: one paper claimed
that older people with ADHD have more impairments, but have better lefi-expectations than
younger people with ADHD, one study claimed that increasing age raises the odds of poor
QoL, while two studies did not find any changes on QoL of patients with ADHD regarding
age. Three studies dealt with the effect of ADHD on QoL regarding the gender: two studies
did not find difference on QoL of patients with ADHD, while one study found that women
with ADHD have lower QoL. Conclusions: Based on the studies published in the last 5 years,
patients with ADHD have lower QoL than healthy people; moreover, they have lower QoL
in many areas than patients with several somatic or other mental illnesses. More studies are
needed regarding the effects of ADHD on QoL by age and gender.

Pharmacological treatment in alcohol-, drug- and benzodiazepine-dependent patients – the significance of trazodone

Currently detoxification of drug and alcohol dependent patients is pharmacologically
unresolved, and long-term treatment following the acute phase is also not very successful including a high number of relapses. We would need medications that on the short
term cease: the severe vegetative symptoms, the pain, the extremely distressing psychosyndrome characterised by restlessness, anxiety or acute depressive symptoms, and the craving.
The optimal would be if there was one medication capable of simultaneously alleviating or
diminishing all the above symptoms without causing dependency and preventing relapse
in the long-term. Dependency is almost all cases accompanied by primary and/or secondary mood disorder or sleep disorder which should also be treated. It should be considered,
however, that following withdrawal of the agent benzodiazepine dependency often develops. The serotonin antagonist and reuptake inhibitor (SARI) trazodone is effective in the
treatment of depression accompanied by sleeping disorder and it has also shown efficacy
in alcohol and benzodiazepine-dependency. Its administration may improve the efficacy of
detoxification and treatment of following conditions, may decrease medication load and the
risk of the development of benzodiazepine dependency. In our clinical practice we frequently
use this agent to treat our patients simultaneously suffering from depression and addiction
problems, gaining experience comparing it to other pharmacotherapies (benzodiazepines
or other antidepressants). The medication is not approved for alcohol and drug dependence,
however, treatment t of comorbid conditions is not against to the official recommendations.
Our aim was, in addition to reviewing the literature, to share our experience which, although
cannot be considered an evidence based study, we deemed worthy of publishing. We cannot,
at this point, put forward a protocol addressing all related scientific problems and problems
of off-label treatment, and we could not so far treat enough patients with trazodone so that
our results would be statistically proven. ”Acute” and long term treatment of dependency is
not sufficiently effective with a substantial relapse rate, which is in part related to the lack of
specific medication also for long term treatment. Among the available psychopharmacons,
trazodone is a possible choice, since, as based on patients’ reports and clinical observations,
improvement of their depressive conditions and sleep problems potentially decreases the
risk of relapse of drug and alcohol dependence.

Niemann-Pick disease (NPD) is a group of distinct rare disorders (i.e. NPD-A; NPD-B;
NPD-C) – with autosomal recessive inheritance pattern – within the class of the inborn
disorders of the sphingolipid metabolism (called sphingolipidoses). Since patients
with NPD-A do not survive into adulthood and most patients with NPD-B are free
from neuropsychiatric symptoms we discuss only briefly type-A and -B NPD and
mainly constrict our review discussing the neuropsychiatric symptoms along with the
pathomechanism and the treatment of NPD-C. NPD-C is clinically heterogeneous, with
notable variations in age at onset, course and symptoms. Along with systemic signs,
neurologic and psychiatric symptoms are quite frequent in NPD-C and in its adult form
sometimes psychiatric symptoms are the first ones appearing. Unfortunately, the majority of clinicans (including adult psychiatrists and neurologists) are not aware of the
symptom group characteristic to NPD-C so patients with this disorder are frequently
misdiagnosed in the clinical practice. Since neuropsychiatric manifestations of NPD-C
may be treated with a substrate reduction agent (miglustat) with greater awareness
of the identification of neuropsychiatric symptoms in due course is the prerequisite
of proper and early diagnosis and treatment.

When treating schizophrenia and other psychotic disorders, clinicians often encounter the
problems of non-adherence, which is almost the most common drawback of achieving remission and a better quality of life. The uncertain oral drug taking habits may lead to relapses and
rehospitalizations. Using second generation long acting injectables we have more possibilities
to avoid these problems. This review attempts to present and describe the pharmacological
background of the modern long acting injectables including patient cases where olanzapine
pamoate long acting injectable provided remission and better quality of life for the patients.

33 year old British male’s first presentation to mental health services was prompted by florid paranoid psychosis and volatile aggression. The patient developed agitated catatonia which eventually improved after 12 courses of ECT. The ongoing psychopharmacological management includes a second generation antipsychotic, a mood stabilizer antiepileptic and an anxiolytic. All investigations including blood tests, CSF analysis, urine and hair drug screen, CT and MRI scans with multidisciplinary medical consultations excluded any underlying pathology. The working diagnosis is an enduring paranoid psychosis with prominent signs of cognitive decline, all of which conclude to Kraepelin’s Dementia Praecox. 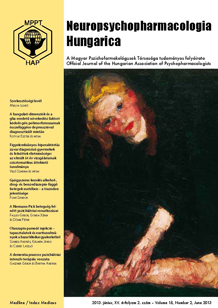