Aims: Studies have demonstrated neuropsychological deficits across a variety of cognitive
domains in patients with major depressive disorder (MDD) during acute episode. However,
limited data are available concerning whether these abnormalities persist in the remission
phase. Methods: In the present study CANTAB (Cambridge Automated Neuropsychological
Test Battery) was used to evaluate the cognitive impairment associated with depression during
acute episode and in remission. 25 patients with MDD during an acute episode and 11 patients
also during remission were tested with CANTAB. Results: During the acute episode,
Delayed matching to sample, Paired associate learning, Spatial recognition memory, Rapid visual
processing and Visuospatial planning were impaired. In remission the improvement of visual
learning ability, spatial recognition memory, psychomotor speed, and executive function was
observed. Conclusions: The results suggest that MDD is associated with neurocognitive dysfunctions in different domains, the most prominent deficit was found in the Paired associate
learning test, which requires both the elaboration of ”frontal strategies” and the ”mnemonic
processes”. Cognitive impairment was found to improve partly in remission, suggesting that
an individual’s current mood interacts with the ability to perform a cognitive task. Besides
these state markers, trait deficits are important because cognitive impairments which do not
improve in remission might serve as endophenotypes of depression.

New data for the pathomechanism of neuropathic pain: therapeutic evidences

The present work is based on literature data from PubMed. Neuropathic pain is caused by
a lesion or disease of the somatosensory system. Peripheral and central sensitization play
a crucial role in its pathomechanism. The clinical symptoms are mainly characterized by
burning and throbbing pain and sensory disturbances like hyperalgesia and allodynia.
Therapeutic recommendations are antidepressants, antiepileptics, opioids and neuro-stimulation methods.

The pulvinar is the largest nucleus of the thalamus. Its lateral and inferior areas have rich
connections with the visual- and dorsolateral parietal cortices. Several cells in the medial
and upper area connect the anterior cingulum and the premotor and prefrontal association
areas. This neuronal network was considered to organize the saccades and visual attention.
Other cells in the medial nucleus have axonal connections with paralimbic-, insular and higher
order association-cortices. The medial structure integrates complex sensory information with
limbic reactivity settings, transmitting these to the temporal and parieto-occipital centres.
The pulvinar is supplied by the posterior chorioideal artery. Visual salience is considered to be
an important function of the pulvinar. Visual selection enables subjects to choose the actually
adequate behavioral act. To serve the visual salience the pulvinar may also inhibit inapproriate
eye movements. The pulvinar appears to be a key structure of the EEG’s alpha rhythm generator, acting together with the parietooccipital and temporal cortices. Dynamic fluctuation of
BOLD signals on fMRI correlates well with the change of alpha power even in resting state.
We presume that the pulvinar is part of a closed cortico-subcortical circuit, analogous with
the striatum, but the output of the pulvinar initiates complex behavioral reactions, including
perception, selective attention and emotions. Damage of the pulvinar may elicit contralateral
visual neglect, because of the dissociation of the neuronal network integrated by the superior
temporal area. Increased activity of the pulvinar was found during abrupt reaction to fearful
visual signals; and also in the etiopathology of endogenous depressions through the alteration of serotonin transporters. Increased bilateral signal intensity of the pulvinar on MRI was
detected in cases of the new variants of Creutzfeldt-Jakob- and Fabry diseases.

The possibilities of suicide prevention in adolescents. A holistic approach to protective and risk factors

There is no other such complex physical, biological, somatic, mental, psychological, psychiatric, cultural, social and spiritual phenomenon and general public health problem, so much
unexplained, meaningless, so tragic, painful, and unreasonable, so difficult, contradictory and
mystified like suicide. In spite of the several already identified background factors, we do not
and we can not know the real reasons behind suicide, because suicide is multi-causal, and can
never be traced back to one single cause, but there are always many biological, psychologicalpsychiatric, historical, social and cultural factors involved in its development. However, the
strongest suicide risk factor is an unrecognized and untreated mental disorder. Suicide among
young people is one of the most serious public health problems. In Hungary 1395 young
people lost their lives due to suicide in the 24> age group between 2000-2010, 1150 males and
245 females. According to epidemiological studies, 24.7% of children and adolescents suffer
from some form of behaviour-, conduct- or other psychiatric disorders. Among adolescents
(aged 15-24) suicide was the first leading cause of death in 2010. Despite great advances in
the psychopharmacology and psychotherapy of mental disorders, suicides persist as a major
cause of mortality, especially among the 15-24-year old population. Victims of suicide are not
healthy individuals. They always suffer from psychiatric or mental, physical or somatic, cultural
(social, historical, mythological) and spiritual disorders. The author tries to classify suicide protective and risk factors according to physical-biological, mental-psychological, cultural-social,
and spiritual aspects. However, it must be remembered that these factors are not necessarily
present in each and every case and may vary from one country to another, one person to
another, depending on cultural, political, (spiritual) and economical features. Risk and protective factors can occur (1) at the physical or biological-somatic level which includes physical
circumstances, genetics, health, and diseases; (2) at the mental or psychological level, which
includes mental health, self-esteem, and ability to deal with difficult circumstances, manage
emotions, or cope with stress; (3) at the cultural level or the broader life environment, and this
includes social, political, environmental, and economic factors that contribute to available
options and quality of life; (4) at the social level, which includes relationships and involvement
with others such as family, friends, workmates, the wider community and the person’s sense
of belonging; (5) at the spiritual level, which includes faith, hope, charity, despair, salvation.
Children and adolescents spend a lot of time at school, so teachers must be educated to
notice any warning signs of suicide, but the majority of pedagogues not only do not know
the most important mental and psychosomatic symptoms, but do not recognize them in
children and do not know how to handle them either. Hopelessness is the most important
spiritual risk factor. The Beck Hopelessness Scale is a tool for easy application in general practice.
The author lists some important symptoms and signs that neither parents nor teachers are
able to recognize and handle, and provides useful advice for prevention.

Treatment and management of affective disorders associated with pregnancy is still an underemphasized field receiving little attention, furthermore, it is burdened with misinformation
as well as incomplete or missing knowledge. Professionals of related fields (psychiatrists,
obstetrician-gynecologists) often provide patients with contradicting information or, due to
their lack of sufficient knowledge, keep referring the patient for information between different
services. However, there is an increasing amount of data and information available, suitable
for drawing conclusions and making it possible to provide adequate and credible counselling
and information for pregnant women or family planning couples. In the present paper we aim
to facilitate this process by reviewing the currently available information.

We report on a case of a patient with schizophrenia who was taking 700 mg extended release
quetiapine fumarate during her entire pregnancy to prevent relapse. At week 41 she gave
birth to a healthy boy. The newborn’s weight was 3410 gramms, his height was 49 cm, his
Apgar score in the first minute was 9, and at 5 minutes, it was 10. 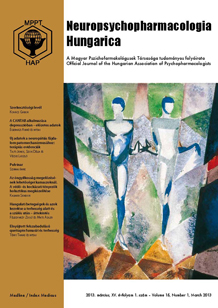