Genetic association analyses of the endocannabinoid system on anxious phenotype

Background: Accumulating data confirmed that the endocannabinoid system (ECS) is involved in the regulation of stress response and emotional processes, therefore ECS became
an important pharmacological target as a potential anxiolytic. Although unequivocal data
from animal studies confirmed the relevancy of the ECS in anxious phenotype, human genetic
data are poorly available in the literature in this field. In the presented studies we tested possible associations between anxious phenotype and the cannabinoid receptor 1 and the fatty
acid amide hydrolase gene polymorphisms. Methods: Almost 900 subjects were involved in
our study from the general population. Anxious phenotype was measured by the State-Trait
Anxiety Inventory (STAI) and the anxious subscale of the Brief Symptom Inventory (BSI-ANX).
Genetic polymorphisms were genotyped from buccal mucosa samples’ DNA by MassArray
Sequenom technic. General linear models and post hoc tests were performed for statistical analyses. Results: Phenotypic variances were not dependent on single marker’s effect.
However, interaction analyses provided significant results. Carriers of GG genotype of the
rs2180619 scored significantly higher on the STAI-T scale in presence of SS genotype of 5-HTTLPR compared to other allelic variants (p=0.0006). SS genotype together with GG genotype
meant almost a 5-fold risk to be anxious (OR=4.64, 95% CI: 1.7-12.71). In case of the C385A
polymorphism of FAAH gene, A allele was associated with high scores of the BSI-ANX and
the STAI-T if there were multiple childhood traumas in the anamnesis compared to C allele
(pinteract=0.00002; pinteract=0.0023; respectively). Conclusion: Our results confirmed earlier positive
data on the association between ECS and anxious phenotype. According to our findings ECS
plays a significant role in the pathomechanism of anxious disorders by a complex mechanism
of genetic interaction with the serotonin transporter gene and childhood traumas.

Background: There is growing evidence that vascular endothelial growth factor (VEGF) plays
a crucial role in neurodevelopment and regeneration. Several data support that intact VEGF
pathway is indispensable for therapeutic effect of antidepressants, any disruption of VEGF
signaling can result treatment resistance. In our study we investigated the peripherial blood
VEGF level before and 4-week after antidepressant treatment in patients with major depressive
episode and we compared VEGF levels between responders and non-responders. Methods:
We recruited 34 patients diagnosed with major depression disorder rom our department.
Depressive symptoms were followed by the Montgomery Asberg Depression Scale. Level
of VEGF was measured from peripheral plasma by ELISA technic. For comparisons we performed general linear models and Mann-Whitney U tests. Results: Baseline VEGF level was
significantly higher in the non-responder subgroup compared to responders (p=0.017). In
regression analyses the baseline and end-point VEGF levels were correlated with end-point
MADRS (p=0.03; p=0.02, respectively). In our sample the higher baseline VEGF level was correlated with 2.75 times greater chance for treatment resistance in non-responders compared
to responders. Conclusion: Our results confirm the significant role of VEGF signaling in the
pathomechanism of major depression disorder. These data suggest that high baseline VEGF
level can be a predictor for lack of therapy response, thus VEGF can be regarded as a potential
biomarker for treatment resistance in major depression disorder.

Backgorund: There is accumulating evidence on the association between the cholinergic
system and nicotine dependence (ND) in the literature and the bidirectional relationship of ND
and depression. However, the molecular background of the development of ND and related
affective phenotype is not clear. Methods: We recruited 255 tretament-seeking smokers into
our study. For phenotyping assessments we used the Fagerstrom Nicotine Dependence Test;
The Minnessotta Nicotine Withdrawal Scale; the Zung Self-Rating Depression Scale and the
Parental Bonding Instrument. DNA was isolated from buccal mucosa sample and CHRNA4 and
CHRNB2 gene SNPs were genotyped with MassArray Sequenom techniques. For statistical
analyses ANOVA test, Mann-Whitney U test, linear regression, two-step cluster analyses and
hapscore tests were performed. Results: Two-step cluster analysis revealed 3 well-differentiated
subgroups among smokers based on phenotypic characteristics. One subgroup was associated with the highest withdrawal and depressive scores. Frequency of the risk haplotype
of CHRNA4 was significantly higher in this subgroup (p=0.019). Further, lifetime prevalence
of major depression was also significantly higher in this subgroup. Besides, CHRNB2 gén variants showed a significant interacting effect with maternal bonding style on suicide thoughts
(p=0.005). Conclusions: Our results confirmed the genetic effect of CHRNA4 and CHRNB2 on
smoking-related depression. These findings suggest that a genetically vulnerable subgroup
can be distinguished among smokers and this subphenotype is more prone to withdrawal
and depressive symptoms. Our data suggest that suicidal risk depends on both CHRNB2 gene
variants and maternal bonding style. Pharmacogenetic concerns of CHRNA4 and CHRNB2
genes might be significant considering suicide as side effect of quitting therapy. Further
pharmacogenetic investigations are requierd to clarify this possibility.

Psychobiological background and clinical aspects of the placebo effect in psychiatry

The placebo-effect is present in almost every field of medicine, however, in the assessment of
the effect of psychotropic drugs it is a major problem. The rise of the placebo-effect in clinical trials is observed during the last decades, in spite of all efforts to introduce new methods
in clinical trials to overcome this problem and the number of studies aiming to unveil the
mechanisms that lie in the background that this phenomenon have risen. A considerable
amount of data has accumulated regarding the psychobiological background of placeboeffect, however, the details of underlying mechanisms are still not clear. Furthermore, the
lack of objective tools for the assessment of the phenotypic changes during the treatment
of psychiatric disorders makes it even more difficult to differentiate the symptom intensity
changes related to drug response from the placebo effect. The consequences of this scarcity
of information concerning the background of placebo-effect may hinder the development
of new compounds, having enormous medical, scientific and economical disadvantages. In
this review we summarise the psychobiological mechanisms in the background of placebo
effect and its impact on clinical trials.

From stone-craved genes to Michelangelo: significance and different aspects of gene-environment interaction

Although genetic studies have improved a lot in recent years, without clinical relevance sometimes their significance is devalued. Reviewing the major milestones of psychogenomics it can
be seen that break-through success is just a question of time. Investigations of direct effect
of genetic variants on phenotypes have not yielded positive findings. However, an important
step was taken by adapting the gene-environment interaction model. In this model genetic
vulnerability stepped into the place of “stone craved” pathology. Further progress happened
when studies of environmental factors were combined with genetic function (epigenetics).
This model provided the possibility for investigation of therapeutic interventions as environmental factors and it was proven that effective treatments exert a modifying effect on gene
expression. Moreover, recent developments focus on therapeutic manipulation of gene function (e.g. chemogenetics). Instead of “stone craved” genes up-to-date dynamically interacting
gene function became the basis of psychogenomics in which correction of the expression
is a potential therapeutic tool. Keeping in mind these trends and developments, there is no
doubt that genetics will be a fundamental part of daily clinical routine in the future. 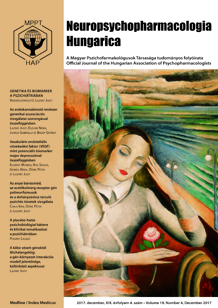