Schizophrenia, bipolar disorder and major depression are associated with nonadherence registered mean figures of around 50%, highlighting the relevance of having simple adherence tools to incorporate into daily clinical practice. For 10 years we have focused on self-report as an assessment method and have studied thousands of outpatients taking thousands of psychiatric medications in three countries. Measurement of treatment adherence during use of polypharmacy is a really complex task as patients could adhere differently to the various medications prescribed, making it essential to assess adherence to each individual medication. This was not possible until the introduction of the Sidorkiewicz Adherence Tool that allows one to separate adherence to each medication, whether poor or not. Health psychologists have developed the Health Belief Model which has not received
enough attention by psychiatrists. Based on this model, we have focused on personality styles and specific beliefs concerning specific medications as possible predictors of poor adherence. We developed the Patient Health Beliefs Questionnaire on Psychiatric Treatment which provides 5 self-reported personality dimensions: negative aspects of medication (pharmacophobia), positive aspects of medication (pharmacophilia), high/low psychological reactance, high/low doctor health locus of control (HLOC) and high/low internal HLOC. Based on the Beliefs about Medicines Questionnaire we have developed a measure of skepticism, defined as a patient’s high concern about adverse reaction to an individual medication and a low belief in its necessity. Our research experience based on the tools for assessing and predicting adherence is presented in a practical manner by using seven boxes and examples.

Poor Adherence to Oral Psychiatric Medication in Adults with Bipolar Disorder: The Psychiatrist May have More Influence than in Other Severe Mental Illnesses

Objective: Medication adherence in bipolar disorder (BD) may be influenced by 6 selfreported dimensions: 1) high/low psychological reactance, 2) high/low internal healthlocus of control (HLOC), 3) high/low doctor HLOC, 4) pharmacophobia, 5) pharmacophilia, and 6) skepticism about a specific medication. This study in Spain, Argentina, and Venezuela included 142 outpatients with BD prescribed 320 psychiatric medications and 1230 other psychiatric outpatients prescribed 2134 medications. Methods: Logistic regression models included adherence for each psychiatric medication, measured by the Sidorkiewicz Adherence Tool as the dependent variable. The models provided adjusted odds ratios (ORs) of dichotomous independent variables: clinical variables and 6 self-reported dimensions.
Results: ORs significant in both groups were: 1) high doctor HLOC (OR=1.87 in BD, OR=1.25 in other patients), 2) high psychological reactance (respectively OR=0.572, OR=0.798), 3) pharmacophobia (respectively OR=0.361, OR=0.614), and 4) skepticism about a specific medication (respectively OR=0.300, OR=0.556). Two ORs were only significant in BD patients: medication duration > 1 year (OR=0.449), and extreme polypharmacy (OR=2.49). The study included 104 BD patients prescribed 122 mood stabilizers and 136 other patients prescribed 140 mood stabilizers. Two ORs were significant for mood stabilizer adherence only in BD
patients: high doctor HLOC and skepticism (respective ORs=2.38, OR=0.390). The study included 87 BD patients prescribed 97 antipsychotics and 417 other patients prescribed 458 antipsychotics. Four ORs were significant for antipsychotic adherence only in the BD group. Conclusions: Future studies of adherence to all/specific medications should explore the specific city/commonality of these dimensions, particularly doctor HLOC, in BD versus other psychiatric patients.

Findings of three articles reporting results in 1372 stabilized outpatients taking 2454
medications in Spain, Argentina, and Venezuela were combined. Prevalence of good adherence was not obviously different across diagnoses: 69.5% (N=212) for schizophrenia, 66.3% (N=142) for bipolar disorder, and 69.8% (N=521) for depression. Besides the focus on stabilized outpatients, other study biases included use of a research sample; limited to oral medications, ignoring long-acting injectable antipsychotics; and lack of data on active substance abuse, clinical severity, and insight. Logistic regression models explored predictors of good vs. poor adherence. The six self-reported variables studied were pharmacophobia, pharmacophilia,
high psychological reactance, high internal health locus of control (LOC), high doctor LOC, and skepticism concerning specific medications. ORs were significant in 56% (47/84) of the statistical tests vs. 24% (23/98) of ORs significant in case of 7 demographic/clinical variables (p=0.001). At least 2/3 of the ORs for pharmacophobia, pharmacophilia and skepticism were significantly associated with adherence in cases and controls, indicating their independence from diagnoses. In need of replication, three other self-reported measures had differential effects on adherence across diagnoses. High psychological reactance was associated with
decreased adherence to antidepressant medications in general, or for patients with mood disorders. High internal LOC as associated with poor adherence may reflect the distrust patients with schizophrenia or severe bipolar disorder have of other people. High doctor LOC was significantly associated with increased adherence only in patients with bipolar disorder, but was significant for all medications, mood stabilizers and antipsychotics, indicating the relevance of the patient-psychiatrist relationship in these patients.

Poor Adherence to Oral Psychiatric Medication in Adults with Depression: Psychological Reactance May Have Specific Effects in Depression

Objective: Medication adherence in psychiatric disorders, including depression, may be influenced by 6 self-reported dimensions: 1) high/low doctor health locus of control (HLOC), 2) high/low internal HLOC, 3) high/low psychological reactance, 4) pharmacophilia, 5) pharmacophobia, and 6) skepticism about a specific medication. This study in Spain, Argentina, and Venezuela included 521 outpatients with depression prescribed 920 psychiatric medications and 851 other psychiatric outpatients prescribed 1534 medications. Methods: Logistic regression models were completed in patients with depression and psychiatric controls. The dependent variable was adherence for each psychiatric medication (Sidorkiewicz Adherence Tool). The models provided adjusted odds ratios (ORs) of dichotomous independent variables: clinical variables, and 6 self-reported dimensions. Results: ORs significant in both diagnostic groups were: 1) pharmacophobia (OR=0.500 in depression, OR=0.599 in other patients), 2) pharmacophilia (respectively OR=1.51, OR=1.65), 3) treatment for 1 year (respectively OR=0.731, OR=0.608), 4) geriatric age (respectively OR=2.28, OR=3.02), and 5) skepticism about a specific medication (respectively OR=0.443, OR=0.569). Two ORs were significant in the depression group, but not in the controls: the country of Spain (OR=0.744), and high psychological reactance (OR=0.685). The study included 470 depression patients prescribed 510 antidepressants and 348 other patients prescribed 370 antidepressants. One OR was significant for antidepressant adherence in both groups: high psychological reactance (respectively OR=0.597, OR=0.561). Conclusions: All clinical studies using self-report include biases but the most important is lack of access to patients not coming for treatment. Future studies should further explore the specificity/commonality of these dimensions, particularly psychological reactance, in depression versus other psychiatric disorders.

Poor Adherence to Oral Psychiatric Medication in Adults with Schizophrenia May Be Influenced by Pharmacophobia, High Internal Health Locus of Control and Treatment Duration 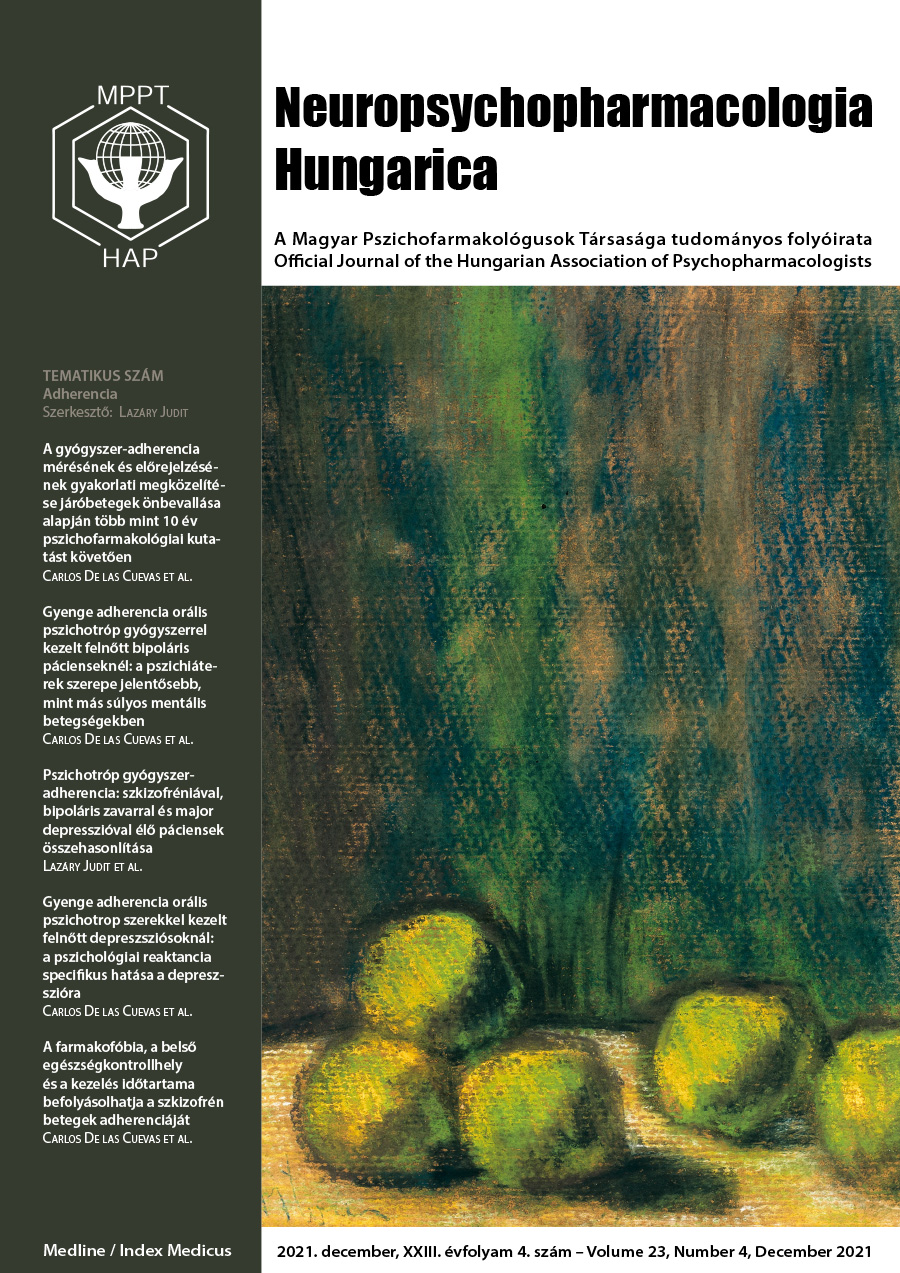