Are the diseases of civilization caused by learnt behaviour, not the stress itself?

The role of carbon dioxide (CO2) is underestimated in the pathomechanism of neuropsychiatric disorders, though it is an important link between psyche and corpus. The actual spiritual status also influences respiration (we start breathing rarely, frequently, irregularly, etc.) causing pH alteration in the organism; on the other hand the actual cytosolic pH of neurons is one of the main modifiers of Ca2+-conductance, hence breathing directly, quickly, and effectively influences the second messenger system through Ca2+-currents. (Decreasing pCO2 turns pH into alkalic direction, augments psychic arousal, while increasing pCO2 turns pH acidic, diminishes arousal.) One of the most important homeostatic function is to maintain or restore the permanence of H+-concentration, hence the alteration of CO2 level starts cascades of contraregulation. However it can be proved that there is no perfect compensation, therefore compensational mechanisms may generate psychosomatic disorders causing secondary alterations in the “milieu interieur”. Authors discuss the special physico-chemical features of CO2, the laws of interweaving alterations of pCO2 and catecholamine levels (their feedback mechanism), the role of acute and chronic hypocapnia in several hyperarousal disorders (delirium, panic disorder, hyperventilation syndrome, generalized anxiety disorder, bipolar disorder), the role of “locus minoris resistentiae” in the pathomechanism of psychosomatic disorders. It is supposed that the diseases of civilization are caused not by the stress itself but the lack of human instinctive reaction to it, and this would cause long-lasting CO2 alteration. Increased brain-pCO2, acidic cytosol pH and/or increased basal cytosolic Ca2+ level diminish inward Ca2+-current into cytosol, decrease arousal – they may cause dysthymia or depression. This state usually co-exists with ATP-deficiency and decreased cytosolic Mg2+ content. This energeticaland ion-constellation is also typical of ageingassociated and chronic organic disorders. It is the most important link between depression and organic disorders (e.g. coronary heart disease). The above-mentioned model is supported by the fact that H+ and/or Ca2+ metabolism is affected by several drugs (catecholemines, serotonin, lithium, triaecetyluridine, thyroxine) and sleep deprivation, they act for the logically right direction. 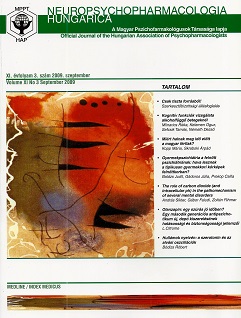