In our current understanding of mood disorders, the role of genes is diverse including the mediation of the effects of provoking and protective factors. Different or partially overlapping gene sets play a major role in the development of personality traits including also affective temperaments, in the mediation of the effects of environmental factors, and in the interaction of these elements in the development of depression. Certain genes are associated with personality traits and temperaments including e.g., neuroticism, impulsivity, openness, rumination and extroversion. Environmental factors consist of external (early and provoking life events, seasonal changes, social support etc.) and internal factors (hormones, biological rhythm generators, comorbid disorders etc). Some of these environmental factors, such as early life events and some prenatal events directly influence the development of personality traits and temperaments. In the NEWMOOD cohort polymorphisms of the genes of the serotonin transporter, 5-HT1A, 5-HT1B and 5-HT2A and endocannabinoid CB1 receptors, tryptophan hydroxylase, CREB1, BDNF and GIRK provide evidence for the involvement of these genes in the development of depression. Based on their role in this process they could be assigned to different gene sets. The role of certain genes, such as promoter polymorphisms of the serotonin transporter (5-HTTLPR) and CB1 receptor has been shown in more than one of the above factors. Furthermore, gene-gene interactions of these promoters associated with anxiety suggest the application of these polymorphisms in personalized medicine. In this review we introduce a new model including environmental factors, genes, trait and temperament markers based on human genetic studies.

Pharmaco- and therapygenetic aspects in the treatment of anxiety disorders beyond the serotonergic system: a brief review

Pharmaco- and therapygenetic aspects in the treatment of anxiety disorders beyond the serotonergic system: a brief review

Anxiety disorders (ADs) are among the most frequent psychiatric disorders. In addition, key features of ADs include that they are among the earliest mental disorders to manifest and that their first specific treatment frequently occurs several years after the onset of symptoms. Although the heritability of anxiety disorders is well known, the genetic determination of response to different modalities (psycho- or pharmacotherapy) used in treatment of patients with ADs is lesser investigated. Several studies focused on the role of serotonergic genes in the etiopathology and pharmacotherapy of anxiety disorders, however, less attention was paid to variants of other genes. In this review we focus on the cytochrome P 450, BDNF, COMT, MAOA, EAA-3 transporter, dopamine transporter and dopamine receptor gene polymorphisms and their effects with respect to the pharmacogenetics of anxiety disorders. We discuss the current knowledge on pharmacogenetic/therapygenetic aspects of anxiety disorders beyond the serotonergic system.

The role of purinergic signaling in depressive disorders

The role of purinergic signaling in depressive disorders

The purinergic signaling system consists of transporters, enzymes and receptors responsible for the synthesis, release, action and extracellular inactivation of adenosine 5’-triphosphate (ATP) and its extracellular breakdown product adenosine. The actions of ATP are mediated ionotropic P2X and metabotropic P2Y receptor subfamilies, whilst the actions of adenosine are mediated by P1 adenosine receptors. Purinergic signaling pathways are widely expressed in the central nervous system (CNS) and participate in its normal and pathological functions. Among P2X receptors, the P2X7 receptor (P2rx7) has received considerable interest in both basic and clinical neuropsychiatric research because of its profound effects in animal CNS pathology and its potential involvement as a susceptibility gene in mood disorders. Although genetic findings were not always consistently replicated, several studies demonstrated that single nucleotide polymorphisms (SNPs) in the human P2X7 gene (P2RX7) show significant association with major depressive disorder and bipolar disorder. Animal studies revealed that the genetic knock-down or pharmacological antagonism leads to reduced depressive-like behavior, attenuated response in mania-model and alterations in stress reactivity. A potential mechanism of P2rx7 activation on mood related behavior is increased glutamate release, activation of extrasynaptic NMDA receptors and subsequent enduring changes in neuroplasticity. In addition, dysregulation of monoaminergic transmission and HPA axis reactivity could also contribute to the observed changes in behavior. Besides P2rx7, the inhibition of adenosine A1 and A2A receptors also mediate antidepressant-like effects in animal experiments. In conclusion, despite contradictions between existing data, these findings point to the therapeutic potential of the purinergic signaling system in mood disorders.

Kynurenines in cognitive functions: their possible role in depression

Kynurenines in cognitive functions: their possible role in depression

Depression can originate from changes in tryptophan availability, caused by activation of the kynurenine pathway (KP) as a result of inflammation. Alterations in the KP and the changing levels of its metabolites have recently been considered to be factors contributing to the pathogenesis of depression. The key molecular mediator which induces the conversion of tryptophan into kynurenine is indoleamine-2,3-dioxygenase. Following its activation, both the production of neurotoxic compounds and the diminished peripheral accessibility of tryptophan are regarded as essential steps in the pathophysiological processes. The aim of this review is to survey the role of the KP in depression and its relationships with cognitive functions.

The role of general practitioners in prevention of depression-related suicides

The role of general practitioners in prevention of depression-related suicides

Suicide is a ubiquitous phenomenon present in every country, and a function of the constellation of multiple risk and protective factors. The relatively low occurrence of attempted and completed suicide in the general community makes its research and consequentially prediction and prevention difficult, however, suicide events are common among psychiatric patients who contact their general practitioners some weeks or months before their suicidal act. Major depressive episode is the most common current psychiatric diagnosis among suicide victims and attempters (56-87%), and successful acute and long-term treatment of depression significantly reduces the risk of suicidal behaviour even in this high-risk population. The point prevalence of unipolar and bipolar major depressive episode encountered in general practice is more than 10% but unfortunately about half of these cases remain unrecognized, untreated or mistreated. As over half of all suicide victims contact their general practitioners within four weeks before their death, primary care physicians play a key role in suicide prediction and prevention. Several large-scale community studies show that education of general practitioners and other medical professionals on the recognition and appropriate pharmacotherapy of depression, particularly in combination with psycho-social interventions and public education significantly improves identification and treatment of depression and consequentially reduces the rate of completed and attempted suicide in the areas served by trained doctors.

Cultural differences in the development and characteristics of depression

Beyond Structural Equation Modeling: model properties and effect size from a Bayesian viewpoint. An example of complex phenotype - genotype associations in depression

Beyond Structural Equation Modeling: model properties and effect size from a Bayesian viewpoint. An example of complex phenotype – genotype associations in depression

Despite the rapid evolution of measurement technologies in biomedicine and genetics, most of the recent studies aiming to explore the genetic background of multifactorial diseases were only moderately successful. One of the causes of this phenomenon is that the bottleneck of genetic research is no longer the measurement process related to various laboratory technologies, but rather the analysis and interpretation of results. The commonly applied univariate methods are inadequate for exploring complex dependency patterns of multifactorial diseases which includes nearly all common diseases, such as depression, hypertension, and asthma. A comprehensive investigation requires multivariate modeling methods that enable the analysis of interactions between factors, and allow a more detailed interpretation of studies measuring complex phenotype descriptors. In this paper we discuss various aspects of multivariate modeling through a case study analyzing the effect of the single nucleotide polymorphism rs6295 in the HTR1A gene on depression and impulsivity. We overview basic concepts related to multivariate modeling and compare the properties of two investigated modeling techniques: Structural Equation Modeling and Bayesian network based learning algorithms. The resulting models demonstrate the advantages of the Bayesian approach in terms of model properties and effect size as it allows coherent handling of the weakly significant effect of rs6295. Results also confirm the mediating role of impulsivity between the SNP rs6295 of HTR1A and depression.

Association between the COMT gene and rumination in a Hungarian sample

Association between the COMT gene and rumination in a Hungarian sample

Introduction: Rumination is a multidimensional trait which is a proven risk factor in the vulnerability to depression. The aim to identify the main risk genes for depression in addition to the gene-environment interactions pointed to the importance of intermediate phenotypes, like rumination, to improve our understanding of the biological mechanisms of depression. Catechol-O-Methyltransferase (COMT) gene is extensively investigated in depression with contradictory results but its association with rumination, as an intermediate phenotype in depression, has not been investigated yet. Methods: In our study, four tagging SNPs in the COMT gene (rs933271, rs740603, rs4680, rs4646316) were genotyped in a nonclinical Hungarian sample (n=939). We investigated the association between the COMT gene and rumination scores measured by the Ruminative Response Scale using haplotype trend regression. Results: We found a significant association between COMT haplotypes and rumination scores (p=0.013) but no significant association was apparent between the functional Val158Met polymorphism (rs4680) and rumination in any genetic model. Discussion: Variations in the COMT gene exert complex effects on susceptibility to depression involving intermediate phenotypes, such as rumination and also impulsivity, as we previously demonstrated. Both rumination and impulsivity represent maladaptive cognitive styles that can lead to depressive state by influencing the response to negative life events and life stressors. In conclusion, our findings provide evidence that in addition to other genes, COMT also has a significant role in the development of depression, and demonstrate that analysing the complex phenotype associations of genes by haplotype tagging is a powerful method. 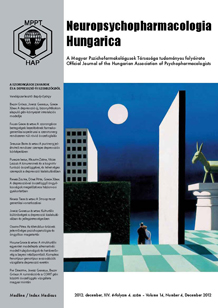